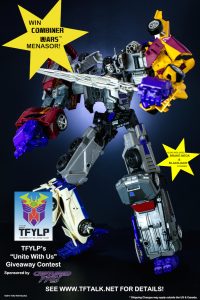 “Unite With Us” Giveaway

TFYLP & Captured Prey.com are proud to bring to you the “Unite With Us” grand giveaway contest!  The winner of this contest will be the first person to gather all six clues (provided over the course of 6 episodes, beginning Fri. Aug. 28th, 2015).  The prize will be a new in package complete set of Combiner Wars Stunticons–Motormaster, Dead End, Breakdown, DragStrip, Offroad, Brake-Neck, & Blackjack, provided by Captured Prey.com.   Listen to each episode, and gather the clue given at some point during the episode.  After all SIX clues are given, piece them together to form the answer, then be the FIRST person to TWEET it to us on our Twitter page (@TFYLP) OR our Facebook public group.

The rules are as follows (PLEASE read CAREFULLY–there is a way to get disqualified! Let’s make this equal and fun for everyone!)

Of course, this contest would not be made possible without our awesome sponsor, CAPTURED PREY.  Captured Prey offers a wide selection of Transformers action figures both foreign & domestic, as well as popular 3rd Party Transformer items.  You can save a lot through the Captured Prey Loyalty program, and even more with FREE basic shipping on orders of $150 or more, so head on over there and check them out today if you haven’t already!