Well here I go again with my first *official* entry into this blog, the last one was pretty much just telling you what I’m doing here.  Go back and check it out if you haven’t yet.

Ok, my first big topic for blog posting is one that has really risen to prominence in the last 5 years or so… Third Party toys vs. Official Product.  Now, before I go into this article any farther, I’m going to preface by saying that I’m no legal expert, nor am I going to purport that my stance is the right one;  bottom line is, I am a collector, and a fan.

A few short years ago, 3rd Party products were mostly relegated to add-on kits; new heads, weapons, pieces that make one figure “powered up”, etc.  Soon, we started seeing complete, full figures that closely resembled official characters.  Immediately, the legality of such clear representations of official characters began to heat up;  people that vehemently denounced all that 3rd Parties stood for, those that lauded the companies’ gall to do what official channels couldn’t–or wouldn’t do.

This can be a good-and bad thing.  It’s great for collectors looking for that “perfect” homage to their favorite character, and sometimes waiting for an eternity for that character from the official sources of Hasbro or Takara-Tomy that may or may not come at all.  For example, my favorite Transformers character is Weirdwolf (hence my online username identity).  The last time we got an official Weirdwolf toy was the BotCon 2007 attendee figure from the Transformers Cybertron Snarl mold. While I am happy this toy exists, and I DO own it, I must admit this isn’t as great as I’d like it to be.  YES, he’s a wolf, YES, he’s the right colors, but he’s not a Headmaster like the original incarnation of the character was to be.  Fortunately, MasterShooter Collectibles did a Targetmaster that could be used for this official toy, at least giving him a partner that he so sorely 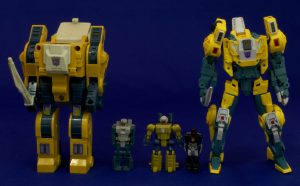 lacked.  Enter Fansproject with Quadruple U, their version of the Headmaster original.  Correct colors, correct alt mode,  Headmaster to boot.  Color this fan yellow with happy (pun intended).  I could have sat around for a very long time for an official version of the character I so love, but the likelihood is low because he’s a rather obscure character, and well, they’re not doing a lot of Headmaster homages lately–although there is an official Headmaster version of the Autobot Brainstorm coming out shortly as of this writing in the Generations toy line.  That being said, should they EVER release another official Weirdwolf as a Headmaster, as long as it is a yellow and blue Headmaster wolf, I’ll buy it.  Oh heck, maybe even if it’s just close.

It could be argued that I’m taking money away from official product by buying third party toys.  I tend to disagree, because if I am as big a collector and fan as I say I am,

I’ll buy versions of my favorite characters official-or not.  Admittedly, I’d probably feel better about buying a toy if it were official, but it’s certainly not enough to make me not want to buy 3rd party at all. I eagerly hope that one day we’ll get official versions of the original Constructicons (all SIX in their proper forms and names) hopefully in Masterpiece form (now THAT is a dream!).  Until then, I’ll happily enjoy my TFC Constructicons that form Hercules, a version of Devastator.  There’s also Maketoy’s Giant that is out there as well, but I much prefer the looks of the TFC Hercules bots over the Maketoys one.  Again, if there ever were official versions of these guys made, I’ll buy those as well, so I’m not taking money out of the pockets of the official sources.  It is understood, though that some people don’t buy multiple versions of a character that they like.  If they feel that the 3rd party version satisfies their need for a character sufficiently, they buy it and it only.  This, I can see, CAN hurt the bottom line of official sources, and if done enough it could lead to the end of the toy line all-together.  It would take a lot I know, but I admit that if it got bad enough it COULD happen.

Call it IP theft, copyright dodging, whatever, the legality of these toys always confuses me.  I’ve heard from multiple different people that have “read up” and fully understand the legality of third party toys, people that apparently stayed at a Holiday Inn Express last night mind you, and that as long as the toy shares no design to pre-existing designs (ie, straight-up mold copy (HI, iGEAR! *waves*) there’s no problem.  On the other hand, I hear people arguing that it doesn’t matter if it shares design of a pre-existing toy or

character, as long as it looks like the character, it is theft/copyright infringement/whatever-you-want-to-call-it.  I could literally stand between two people who legitimately know what they’re talking about on this matter and feel like I’m watching a tennis match.  My brain, it hurtses!

I reiterate what I said in my opening- I’m a fan and collector.  Financial responsibilities of corporations that produce these products aren’t my worry.  My worries lie solely in what I want to buy, and I leave it at that, I’ll buy whatever the heck I effin’ want to buy.  I’ll leave it to Hasbro, Takara-Tomy, Fansproject, ToyWorld, whomever to figure out who should be doing what.  I understand that there’s a lot of factors that goes into what toys are released, what toys get designed, etc.  First of all, and most importantly, is COST.  Is the design within budget?  If not, can we still release this toy if we cut a few corners (ie make it smaller (Classics Optimus Prime), remove some paint apps, mold detail, etc, can it be within budget then?  Is the release of this character worth it?  In other words, is it a character that fans and collectors want to buy, is it a character with meaning?  I understand that the latter isn’t a HIGH priority in the factors that determine a release, but I’m sure it’s in there

somewhere–it has to be. There’s many other factors in toy releases that are important to consider, too many to just sit and list and discuss them all.  The point is, is that Hasbro/Takara-Tomy–the official channels–have to abide by these rules (toy safety laws also play a big role) where 3rd party toys don’t have to so much.  Sure, I’m sure a fair amount of economical consideration is done, but nowhere near as much as official releases.  Hasbro & Takara-Tomy must consider sharp edges, small parts, etc because their primary market are kids.  Sorry all you 40-year old virgins out there in your grandma’s basement, you are NOT the primary target market for the official toys.  Granted, more and more the collector market is growing, and may overtake the child’s share in the toy aisle, but that’s for a future blog for me to discuss.  Third party toys are clearly meant for collectors.  Sometimes sharp edges, lots of detail, oftentimes premium packaging, homages to characters that kids today really have not the first clue about.  The third party market IS for us.  What would be a smart thing to do in my opinion?  Official companies like Hasbro and Takara-Tomy buy up a third party like Mastermind Creations and have them operate in the same capacity that they do now, just officially.  Hasbro/Takara-Tomy wouldn’t have to worry about the R&D that goes into the toys, just reap the benefits of sales.  I don’t know, pipe dream, maybe I’m over-thinking it, or even under-thinking it.  Again, I’m not an expert on such things.  The only opinion I have is that I’m a collector.