Thanks to seibertron.com, for those who missed out on MP Soundwave, Hasbro Asia is set to release a reissue of Soundwave in December of 2016.  The figure will include all of the accessories and 5 cassettes (no Ratbat). This is the same kind of reissue that we have had with MP Optimus Prime.  The reissue will come with a mini die cast cassette player, like how the MP10 reissue came with the Key to Victor Sigma.

The figure will only be available in Taiwan, but online retailers will also have it in stock. 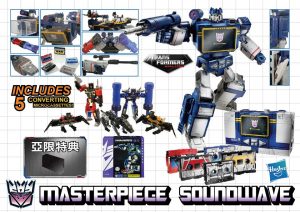 One thought on “Hasbro Asia to Reissue MP Soundwave”